The average adult spends three hours and 25 minutes on their phone every day – 52 minutes of which is spent on social media, a study has found.

A study of 2,000 smartphone-owning Brits found the most popular use for modern mobiles is sending texts followed by making calls and wading in on WhatsApp conversations.

Browsing Facebook, watching TV and making video calls are also among the most common uses.

As a result, the average adult will burn through nine gigabytes of data each month.

It also emerged that one in eight avoid the anxiety of running out of data so they can keep up with their content-driven lives by opting for an unlimited allowance as part of their phone plan.

“The last decade has witnessed the unprecedented technological uprising of the phone industry, to the point where these devices have become the predominant accompaniment and assistant to our daily lives. “As their usage has become more widespread so has their functionality, and our hunger for more data to feed this functionality has only increased.”

AO-Mobile, which launched earlier this month, is aiming to rival its competitors by offering great value, easy to understand deals to suit individual needs and exceptional customer service with a price match guarantee and seven-day customer support.

The study also found that sending messages is still king, with 46 per cent predominantly tapping away at virtual keyboards.

And while the average Brit will make an average of 10 calls on their mobile each week, they will send 17 messages every day.

And 47 per cent admit they’d rather send a text over having a call, compared to the one in seven who prefer a chin-wag on the dog-and-bone.

Of those who would rather communicate by text, three in five prefer messaging as they can decide when to respond, and more than a third say speaking on the phone makes them feel nervous.

It also emerged seven in 10 feel they would be completely lost without their smartphone, with three in 10 checking their device before 7am in the morning.

In the study, conducted by OnePoll, two in five also risk checking their phone while walking or on the move, and 21 per cent wouldn’t be able to resist unlocking their devices while out for a meal.

An audacious one in 10 have even had a peek at their screen while in the middle of a cinema as a film was playing.

As a result, 58 per cent admit they are too reliant on their device.

To combat this dependence, three in 10 have attempted to go on a ‘phone detox’ limiting the amount of time they spend looking at their pocket-sized screen throughout the day.

“Ten years ago the issue of mobile data management would have been an alien subject to most Brits, but for smartphone users on the go, data usage is a constant background thought.” 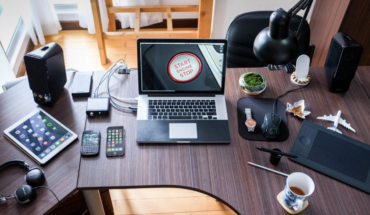